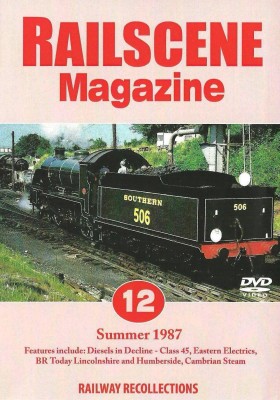 Diesels in Decline – Class 45: Our tribute to the ‘Peaks’ showing them at work on the Midland main line, at Derby, in the Peak district, in Yorkshire and at Gateshead.

Cab Ride – Salisbury to Exeter: From the drivers viewpoint we travelled aboard 50050 Centurion (formerly Leviathon) over the ex LSWRs West of England main line. Despite ‘rationalisation’ by the Western Region, the line flourishes today and is full of interest.

Eastern Electrics: 86s and EMUs on the Norwich Main Line, over the new Trowse Bridge, at Elsenham, changing over at Cambridge, the electrification train on the Royston line and NSE at Peterborough.

Cambrian Steam: BR’s summer programme of steam along the Welsh Coast, featuring 7819 Hinton Manor, 75069 and 46443 bringing the Cambrian back to life. Scenes include Aberystwyth and V of R locomotives, Barmouth Bridge, Tywyn, Pwllheli and Machynlleth shed.

Welsh Narrow Gauge – The Snowdon Mountain Railway: Not ‘preserved’, but a real operating steam railway! Britain’s only rack railway climbs virtually to the top of the mountain, with 1895-built steam locos. We take you to the top after watching the works train depart and visit the shed at Llanberis.

North Norfolk Centenary: Celebrations at Weybourne on the North Norfolk Railway in June 1987, featuring J15 in GER blue livery on a goods train and the Brighton Belle.

Archive Film – Cam in Scotland 1957: By contrast, thirty years ago on the West Highland, with K1s and K2s, also Black 5s, Caley tanks, NB 4-4-2Ts around Crianlarich and at Spean Bridge and Connel Ferry – all in colour!

East Lancs Re-Opening: Our cameras recorded the first public weekend of this, the latest preserved railway to re-open, the line from Bury to Ramsbottom. Featuring double headed steam, a preserved 40 and a Warship – the original kind – at work.

We are producing a number of new DVD’s on railways and shipping and are always looking for archive 8mm or 16mm films. If you feel you may have some useful material, please do let us know via our contact page.